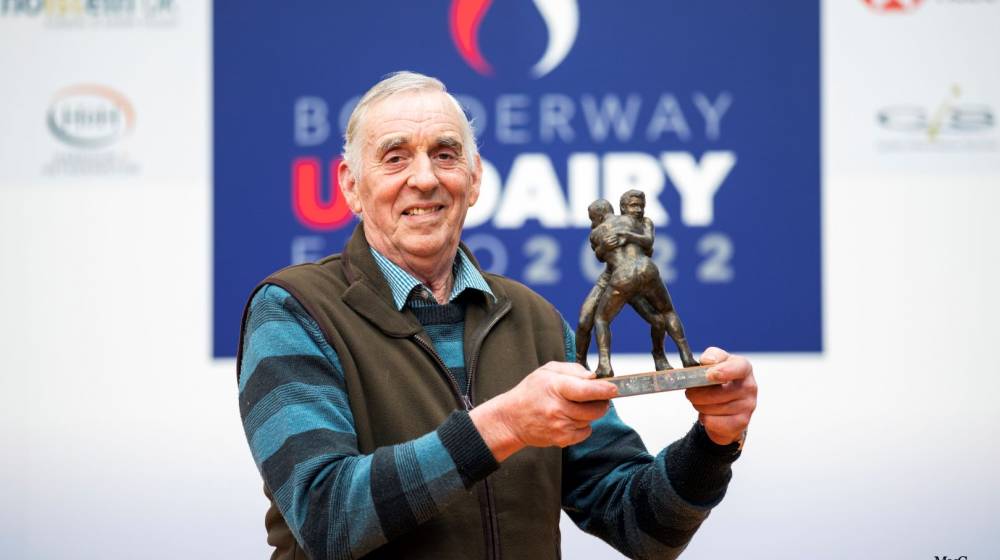 At the 10th Borderway Dairy Expo, Cumbrian farmer Harry Hodgson was announced as the 2022 recipient of the John Dennison Lifetime Achievement Award.

Harry Hodgson from Wormanby Farm, Burgh by Sands, Carlisle was presented with this highly acclaimed award at the UK Borderway Dairy Expo on Saturday 12th March. The accolade was established in 2013, in memory of well-known dairy farmer John Dennison, with the aim to recognise a dairy cattle breeder who is judged to be an exemplary role model and high achiever in the dairy industry.

Well known and highly respected, Harry Hodgson has been a keen Holstein breeder all his life. He has overseen the expansion of the Wormanby Herd alongside his son David and today they have one of the top herds in the UK.

On announcing this year’s winner, Harrison & Hetherington’s Senior Pedigree Dairy Auctioneer, Glyn Lucas said, “The John Dennison Award is always one of the highlights of Borderway UK Dairy Expo, and this year we received many fantastic nominations. However, the committee voted unanimously for Harry as they felt he has been an excellent role model for many aspiring young breeders and for his outstanding skills as a farmer and breeder. He is very like John Dennison himself, both in terms of personality and the way he encourages the next generation dairy farmers. What was absolutely clear is that the younger breeders look up to Harry and respect his input and knowledge.”

“Yes, this award is for Harry and his lifetime’s commitment to the dairy industry, but we must also mention his wife Margaret, who has continuously played an integral role on the farm, supporting Harry and the rest of the family.”

This year marks 50 years since the start of the Hodgson’s family tenancy at Wormanby Farm. Harry farmed in partnership with his brother John until 1988 when their father retired, and by this time the Wormanby Holstein Herd which had secured pedigree status was well established.  With his son David, Harry continued the expansion of the Herd, and today they have several accolades under their belt, including winning the Holstein UK Premier Herd Competition in 2015 and have won the Master Breeder Shield twice in 2009 and 2019.

The Hodgsons are not ones to stand still, and today the herd totals 550 and has several prolific cow families that include the; Mahala, Gloriette, Flo, Redrose and Melody lines.  Harry has a keen interest in tapping into new cow families and in recent years has invested into the Camomile, Allie, O’Kalibra and Jasmine families.

A keen member of the Border & Lakeland Holstein Club Harry has held the position of Chairman and President over the years, as well as being a former Board Member of Harrison & Hetherington. He continues this involvement today as well as encouraging and assisting his grandchildren with calf training on a regular basis.

With so many benefitting from his encouragement, cow knowledge, and enthusiasm for the breed, these are just some of the attributes that helped contribute to Harry receiving the John Dennison Lifetime Achievement Award.

On receiving this prestigious accolade Harry said:” This is the biggest surprise of my life, and this award is not just for me it is for the entire family. John Dennison was a great friend and someone I admired hugely. He has been and still is missed by all within the dairy farming community.”

Previous winners of the John Dennison Lifetime Achievement Award are as follows: -

2020    Blaise Tomlinson, owner of the pedigree Sandyford herd in Loughborough

2018    Jimmy Wilson, from the Tregibby Herd in Cardigan, Wales