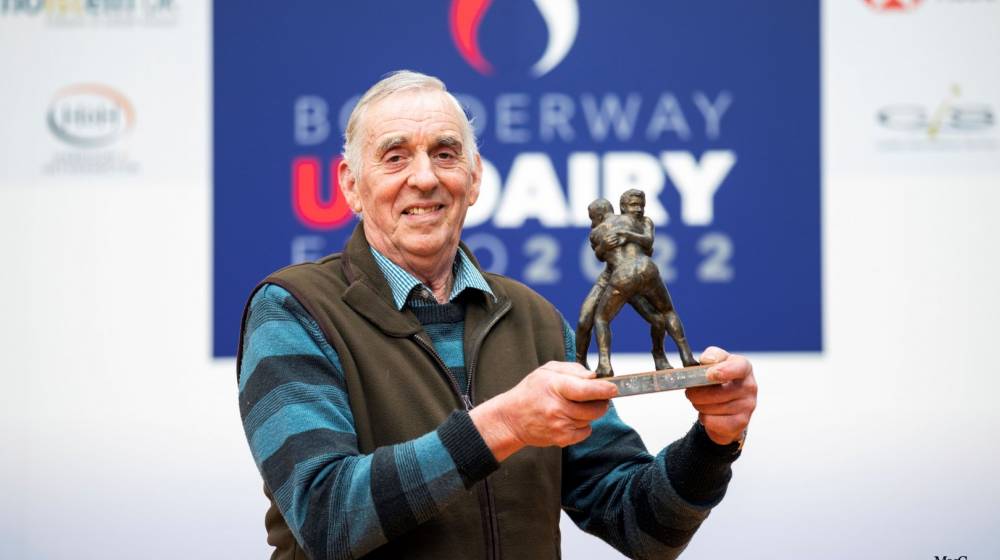 Nominations now sought for what has become one of the dairy industry’s most prestigious awards, the John Dennison Lifetime Achievement Award, with the winner announced during Borderway UK Dairy Expo.

Harrison & Hetherington (H&H) are delighted to announce that the nominations are now open for the 2023 John Dennison Lifetime Achievement Award. The winner will be presented with the award during the  Borderway UK Dairy Expo, one of the UK dairy industry’s most highly acclaimed events. This year’s Expo is on Friday 10th and Saturday 11th March 2023, and this will be the 11th year that the magnificent John Dennison trophy has been presented to someone held in the highest esteem within the industry.

The closing date for nominations is Friday 10th February 2023 and nominees for the accolade should be put forward by sending a brief resume to the John Dennison Lifetime Achievement Award, c/o Glyn Lucas, Harrison & Hetherington Ltd., Borderway Mart, Rosehill, Carlisle CA1 2RS or by email to [email protected].

Borderway Dairy Expo is one of the most important annual shows of dairy cattle in the UK, and the presentation of the John Dennison Lifetime Achievement Awards is always one of the day’s highlights.

The Award was established in memory of John Dennison, a highly respected Cumbrian farmer, after his sad and untimely death in 2012. John was a high achiever and exemplary role model within the dairy industry and the recipient must demonstrate the perfect combination of ability, sportsmanship, integrity, and character as the awards’ namesake did during his farming career.

John Dennison farmed at Scales Farm in Ulverston and established the Denmire Holstein herd. John was regarded as a legend in the industry. He was passionate about breeding and was a stellar ambassador to the younger generation. It was very important to his family and Harrison & Hetherington to find a fitting way to honour his memory, so in 2013 they chose the first lifetime achievement award recipient.

Harrison & Hetherington’s Senior Pedigree Dairy Auctioneer, Glyn Lucas said, “For ten years now  The John Dennison Lifetime Award, presented by The Dennison family, has recognised ten individuals who are held in such high regard within the industry, and I know that John himself would have been delighted with those chosen recipients. The judging panel are always full of admiration for the nominee’s personal achievements and support to the dairy sector and, although a challenging task, we look forward to choosing a worthy winner again this year.”

The 2022 winner was Harry Hodgson from Wormanby Farm, Burgh by Sands, Carlisle who was presented with the award in person during the Borderway UK Dairy Expo in 2022. Well known and highly respected, Harry Hodgson has been a keen Holstein breeder all his life. He has overseen the expansion of the Wormanby Herd alongside his son David and today they have one of the top herds in the UK.

Other previous winners of the John Dennison Lifetime Achievement Award over the last decade are as follows:

2020    Blaise Tomlinson, owner of the pedigree Sandyford herd in Loughborough

2018    Jimmy Wilson, from the Tregibby Herd in Cardigan, Wales

The Borderway UK Dairy Expo  prides itself as one of the key calendar dates in the dairy industry. It acts as a shop window for breeders and producers and brings together some of the UK’s finest dairy stock. Alongside this, it is also a trade event where businesses within the industry showcase the latest research, developments, and innovative technology.

The return of the event last year following the pandemic highlighted the outstanding reputation the event has earned since it inaugurated in 2012. In addition to those attending in person, viewers tuned in from as far as the USA, Australia, and New Zealand to watch the first ever livestreaming of the event.